Tartan Trail Fairies have a quest
To complete, it’ll have to be their best
The test,
Physically, mentally tough
The Great Glen Way upon a SUP

Travelling north against advice
The fairies did’nae think it twice
With steely grit
And legs, strong as girders
These gals are no yer average sisters

Setting off from Corpach
It’s warm, it’s dry, it’s still
With SUPs and fairies all pumped up
Anticipation, thrill

Lying on the bank at Moy
Fairies resting easy
Some food, some drink
A battle plan!!
It’s all a bit too easy

Loch Lochy entered, Confidence high
Wings flutter in the fall
But the fairies are taken unaware
By a full blown autumn squall
It hit them fast
To the shore they fought
Day one complete
Food for thought

Fairyboard windmills twirl in the breeze
Kilted fairies paddle with ease
A pine lined canal
Such a beautiful choice
The old swing bridge,
The start of loch Oich

Morning has brought a change in the weather
More of a wind blowing the heather
Today’s fairies look tough, as their costumes show
Superheros all
It’s the fab four fashion show

Caroline as Hula, all coconuts and cape
Julie as Popeye, with spinach to take
Tracy as She-ra, red, white, gold and blonde
Gillian, kickass! With a sword twelve inches long

Setting off for Augustus
Along the canal
The sight of our heroes
Anything but banal
Wind getting stronger
But our fairies won’t crack
Their motto, their ethos
There’s no turning back

A short day
An afternoon rest
But tomorrow, it’s Nessie
And are put to the test

Blow up Nessies, grass skirts and lei
That’s the fairywear order today
A strong gust blows past
All hope it won’t last
As the get out is fifteen miles away

Independence
Referendum day
But which way will the fairies sway
At the end of loch ness
They each don a dress
Will the Saltire and Jack
Split up the pack
For Scotland, so near
The fairies, no way
The Great Glen complete
It’s big smiles today

By Andy Cochrane, the Fairy Pimp

The Great Glen Canoe Trail is described as ‘One of the UKs great adventures, requiring skill, strength, determination and, above all, wisdom on the water’. Sensible people travel the 60 miles (96km) from Fort William to Inverness by open canoe or sea kayak. Silly people decide to do it on inflatable stand up paddleboards (SUPs), which they neither own nor have any experience.

The trail guide strongly advises paddling in the direction of the prevailing wind but the forecast was for north-easterly / easterly for most of the week. After some last minute discussions we decided to stick with our original plan and headed up to Fort William after work. We’d practised towing techniques and made a plan for if the group was split by strong cross winds but I was still pretty nervous about the safety aspect of the trip. Guess there is definitely something in ignorance is bliss. Andy kindly came along in a sea kayak for the first part of the trip.

We had originally talked about doing the trip completed self-powered and carrying camping gear on our SUPs but this would have made things really tricky, especially when you factor the portages and extra weight. We decided to run shuttles and opt for the comfort of dry bunkhouses.

There was lots of excitement as the Tartan Trail Fairies registered and donned our outfits for day 1. Of course we wanted to go from sea to sea and started at Corpach rather than taking the easy option of launching above Neptune’s staircase.

It took a few portages to master getting the boards and gear on and off the pontoons without risking puncture or skint knees on the rough surface. The sun was shining on our fairy wings as we cruised along the canal to Gairlochy, chatting to the boaters, cyclists and walkers who were curious about our crafts, and outfits.

After the Gairlochy locks, the canal opened up into Loch Lochy (12 miles) and we felt a true sense of wilderness. We were aiming for a layby about half way up Loch Lochy. The water was like glass reflecting inversions of the surrounding mountains. This is the Scotland we’d been accustomed to over summer and this was one of those moments. 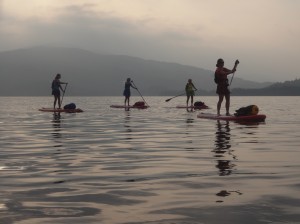 In our limited SUP experience, one of the problems we had noticed is how the fairly static stance causes your feet become numb pretty quickly. We tried to factor in an off the board stretch and snack every hour with an on the board stretch every half hour in between. We pulled into the shore about 5 km short of the layby and in an instant the calmness broke as a headwind picked up; a reminder of the fickle nature of weather. The last section was a battle and we got off the water just as the light was fading. 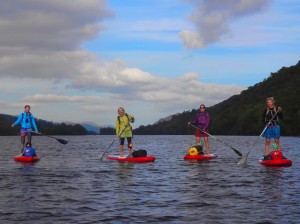 There was a slight breeze as we set off but conditions were still holding up. The remaining part of Loch Lochy was spent enjoying the views and getting excited about the thought of home baking aboard the Eagle. This is an old barge moored just above Laggan Lock, now housing a restaurant and pub. As someone who is obsessed with eating, the disappointment when we arrived to find it closed was too much and I found myself leaving a rambling message on the restaurant phone number. We continued a short distance along sheltered canal guarded by towering trees before Loch Oich opened before us. We had a quick bite at the Great Glen Water Park before continuing down the most stunning Loch on the trip. At just 5 miles long and the resting place for the ship wreck Eala Bhan there was plenty to explore. Just after Aberchalder Swing Bridge we got off the water at Bridge of Oich.

Today was superhero day and while the others had bought outfits, I’d raided my dressing up box and invented Aloha the Hawaiian superhero. This was a shorter day distance wise but one with a lot of portages and a stronger headwind. 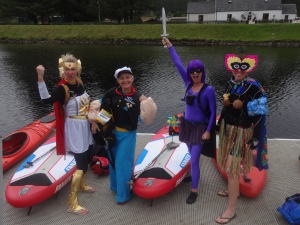 With tales of the Loch Ness tourist boast shedding 5 foot wakes as they pass and no emergency escape routes on the north shore, Loch Ness had been built (by others) to be our nemesis. We decided to stick to the north shore and had a quick scouting trip the night before looking for get outs. We were feeling good in the morning and decided to be more ambitious with our distance, aiming for a few kilometres short of Urquhart Castle. This proved tricky as every layby was perched above steep and heavily vegetated cliffs. Conscious of time, we abandoned the car in a layby convinced the exit point was manageable with SUPs, and wrapped a fluoro jacket round a tree to avoid overshooting.

The sun continued to shine as we set off from Fort Augustus with shouts from the Lock Keepers ‘Shouldn’t you be wearing life jackets rather than fairy wings?’ The girls had been so impressed with my Alohoa Hawaiian Princess outfit that we were all in Hawaiian outfits. Of course we had our safety gear in our dry bags but this was our style and why not wear grass skirts?

After a few miles the tranquillity was broken as jets and helicopters zoomed passed. There seemed to be a lot of flying action that day and laps of Loch Ness must have been in the training mission! We were treated to dipped wings, flashing lights and a rather close encounter with a helicopter. Just what we needed to lift spirits as fatigue started setting in. 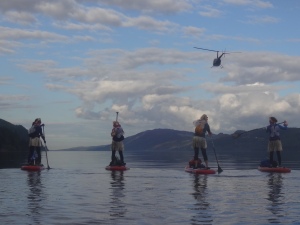 The fluoro jacket was a long time coming and again the light was fading. We must have thought we were an army rescue team when deciding the get out was suitable but there was no way we were going to manage our boards and bodies up to the car without causing damage. The options were to leave the boards at the bottom or paddle another 5km to Urquhart Castle. The latter sounded more fun and with just under an hour of light left we reckoned doable. We felt like pirates landing at the castle at dark, scrambling up the walls and hauling our gear up. We were exhausted but the adventurous spirit prevailed.

While the escape through Urquhart Castle at night was exciting, the challenge of an inconspicuous entry was beyond us. After some gentle persuading, a very kind manager agreed to let us launch with a few provisos to avoid any health and safety issues. My mum and dad had joined as support crew for the last couple of days and it was great having their help for getting all our gear down. We were fully kitted out in wetsuits and buoyancy aids as this was the section we were likely to encounter the big tourist boats. Naturally there was a special touch for the day and it was our home made Nessie Monster hats.

As we passed the Clansman Harbour, there were swarms of tourists about to board for their search of Nessie and we got lots of waves and bewildered looks. It was hot work in the wetsuits and we only had one encounter with a boat’s wake. A dunking would have helped with the overheating so I actively paddled towards it but it’s amazing how stable the boards are and the rollercoaster ride was great fun. We landed on the beach at Lochend without any swims and my mum was waiting with her shoes off and trousers rolled up desperate for a shot on the board.

It was referendum day. The postal votes had been cast and now that Loch Ness was behind us, we ditched our sweaty neoprene for sequence. The build up to the referendum was exhilarating with passionate debates amongst those in the media spot light and also between friends and family who normally shy away from politics. We were split in our voting preferences generating friendly banter in our outfit preparation.

As we set off on the last section of trip there were mixed emotions. We were exhausted but as we left the wilderness behind and signs of urban life started creeping in, the sense of freedom and timelessness evaporated. We pushed on to Clachnaharry Sea Lock, where the journey ended. We had done what many thought we couldn’t. We’d paddle boarded across Scotland from sea to sea. This wasn’t about being the strongest, the fittest, the best prepared. This was about positive attitude and sense of adventure. 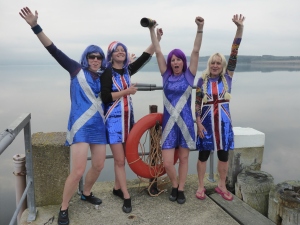 Thanks to everyone who sponsored us.  We managed to raise over £1500 for Maggies and Cancer Support Scotland which was incredible.

Going where my mountain bike takes me

Girl with a Singletrack Mind

Things To Luc At